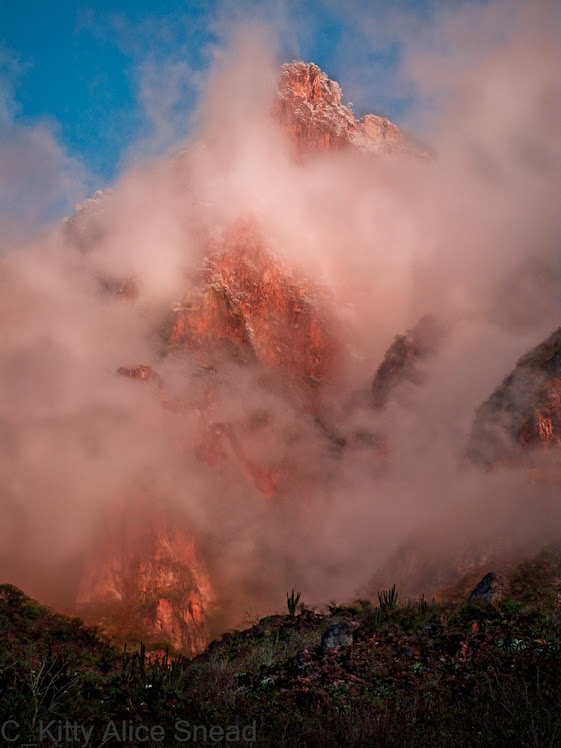 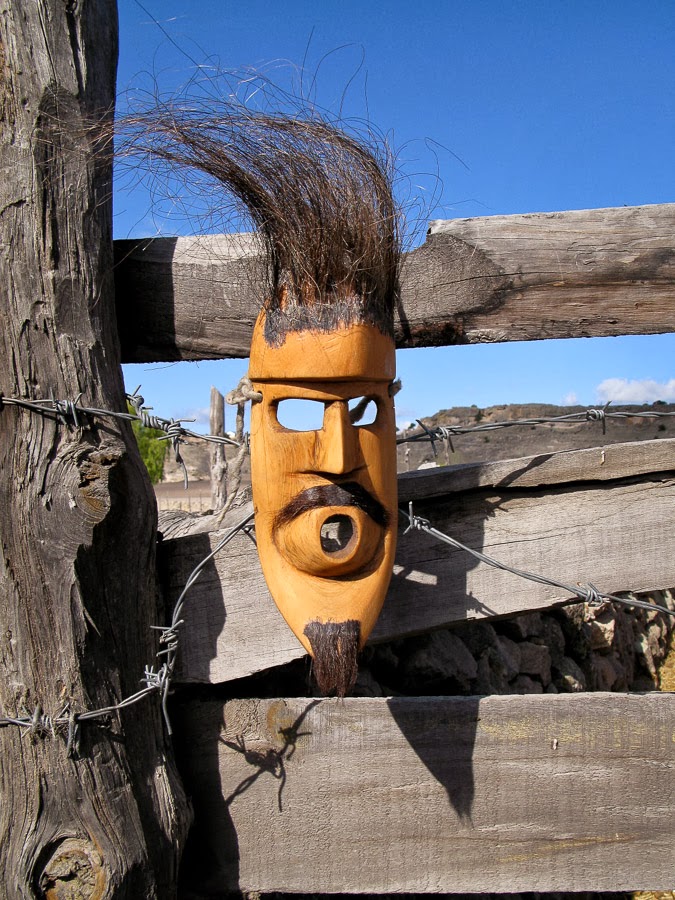 Today Humanities Texas, the state affiliate of the National Endowment for the Humanities, has awarded the El Paso Museum of Archaeology a grant for $1000 to support, in part, the museum's next temporary exhibit, The living Mask Making Tradition of the Raramuri/Tarahumara, curated by photographer, videographer and ethnographer Kitty Alice Snead, based in Dallas.  Ms. Snead's twenty photographs, two videos, two masks, and Raramuri artifacts from the museum's collection will be on exhibit from February 22 through August 31, 2014 and Ms. Snead will present a PowerPoint illustrated lecture on March 22, 2014 from 2:00 to 3:30 pm.  The subject of Ms. Snead's exhibit are the re-introduction of the iconic chapeyoko mask in a remote Raramuri village where it had not been shown in a Mate chine dance in fifty years and photos from another village which show how the mask has continued in use since Spanish times.

The El Paso Museum of Archaeology is dedicated to the interpretation of archaeological and anthropological artifacts through research, exhibits, and education.  They focus on the prehistory and culture of the El Paso-Juarez region and the Southwest.
Posted by Kitty A. Snead at 3:42 PM 0 comments

"Mexico Lindo" at The Wittliff

I am happy to have an image in The Wittliff's current show running from August 1-December 13, 2013.
﻿ "Mexico Lindo" exults in the beauty of Mexico with more than 100 images by 49 photographers from The Wittliff's permanent holdings.  Titled in tribute to the famous song, "Mexico lindo y querido". More than 100 photographs by 49 photographers are presented.
Photographers like John Christian, Richard Speedy and myself have long been inspired by the indigenous cultures of Mexico, such as the Tarahumara and the Huichol. Border images on view by Joel Salcido and Miguel Gandert were taken in Juarez. Among the landscapes and street scenes are images by Faustinus Dereat, Robin Renee Hix, Robb Kendrick, George Miller, and Geoff Winningham. ﻿﻿
﻿﻿﻿﻿  Follow this link to see more information on The Wittliff Collection.
Posted by Kitty A. Snead at 3:56 PM 0 comments

The Mexican Consolate of Dallas has given me this wonderful opportunity to show my work:

The Raramuri people know a secret: the essence of life. In order to preserve it, they rarely ever grant access to outsiders into their world.
I am no stranger- I am "adopted family". That's why I share their universe with you through a ceremony rarely photographed at night: FireLight.
Share with us authentic food, drinks and the Raramuri Culture through photographs, folk art, textiles, & video.

Beginning with the hand shearing of a sheep with common kitchen scissors, this video follows a Tarahumara woman through all the steps and processes of creating a hand-woven blanket and ends with her working the giant ground loom. The goal of the video is to document the traditional processes and to instill in the viewer an appreciation for the ancient craft of weaving.

Mexico's Tarahumara are one of three indigenous groups still maintaining their own traditional lifestyle by living in remote areas of the Copper Canyon located in the State of Chihuahua, Mexico. They are one of the designated National Treasures of Mexico. My talk detailed personal experiences with the weaver, Maria Elena, and my own necessary use of the massive blankets while traveling and camping in the high country of the Sierras Madre Tarahumara.

Fires of the Tarahumara 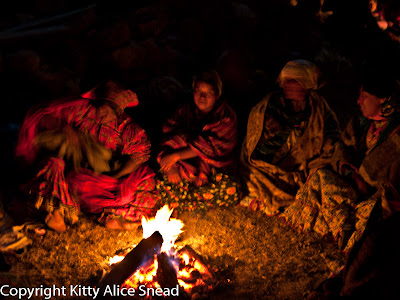 Fire, one of the ancient world's five elements, can be heard, seen and felt.
And the ancient world is yet present here among us humans, in a great gathering, a celebration of the autumnal harvest season.
As darkness falls, the night air is clear, crisp and filled with anticipation.
Then comes Fire, drawing the community near for warmth and companionship;
Fire, illuminator of the night, quells fears shrouded in the darkness.
This night reflection of the fire is found in the hearts of "the People".
The flames & passion ignite the ecstasy of the dance.
Listen now through the veil of time.  Hear low voices speaking an ancient tongue, the cries and delight of children, the rolling laughter of the "the People" echoing out across the land on this night.

This image is a distillation of a Tarahumara ritual celebration and a gift to me that I share with you- the viewer.﻿
Posted by Kitty A. Snead at 3:14 PM 0 comments 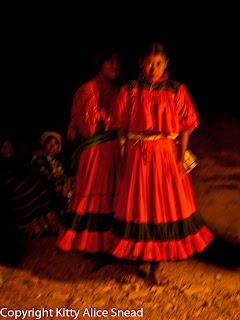 Kitty Alice Snead began "Fire Light" in 2007 after establishing a rapport for ten years with the Tarahumara people of Northwestern Mexico.  These photographs occur on a moonless, spring night during their ritual celebration of Tutu Bur/Yumari. Using only the light from campfires and a fireball lantern, Ms. Snead moved about the dance and the women's circle all night long. From this extraordinary collection, the gallery presents a premier selection of six photographs.

David Clanton's images are the melding of disparate elements of metallic textures, reflecting surfaces of color, or facets of stone. His abstractions derive from eight or more layers of underlying images that boldly create balance, harmony and dimensionality that speak to our urban surfaces as a quality in need of discovery.

Lee Albert Hill presents works from his "Signal Series".  Using the theme of maritime signal flags used for visual communication between ships at sea and mid-20th century junk cars in the middle of West Texas, these composite photographs ask questions about our unsustainable past and how we move on to a new, sustainable future.

Alan Robertson's inspiration for his "Illumination Series" comes from George Eastman, who said, "Light makes photography. Embrace light. Admire it. Love it." In these new works, Mr. Robertson is drawn to the interplay between natural and enhanced light, particularly light fixtures and patterns of illumination.  How these patterns will change with new lighting technology is poignantly highlighted in the way Mr. Robertson points the lens to the grandeur of the architectural past.

Brett Schneider captures Texas landscapes emphasizing the power between sky and land. This relationship highlights the extremes in temperature and mood and adds to the speculation of how Texans are shaped by these extremes in the landscape.

﻿ ﻿ Yesterday we left in the "burro negro" (the black van) and headed out the way we came in towards La Bandera to look for Simon Morales, the old mask maker. We stopped a Tarahumara woman herding her goats to ask for Simon's place. She indicated we needed to go back a bit. He was down a hill off the road.
We found the place, going down a steep incline. There appeared to be no one home, the 1st house was closed up tight. Beyond a cornfield was a  larger house with raised grain storage huts and animal pens. Both compounds had pens and were behind rock walls about 4 feet tall.  We could see a young woman stirring around outside the far compound.
As we passed the 1st smaller compound I could see "animalitos", or small toys on the window sill and I said to Beto, "this is Simon's place".
﻿﻿ ﻿﻿
When we approached the woman, Santiago asked if she knew Simon.  She indicated the 1st adobe home was his but he was not home. We headed back for the "burro negro" at the top of the hill.  It is steep and I struggled, pulling for air stopping to rest several times before I got to the top.  We climbed in the van and headed back to Nararachi.  It seems Simon has two homes with the 2nd located up on the mesa behind the church and towards the air strip.
The nurse, Marta, in the clinic told me before we left that Simon was probably at his home closer to Clause's place as he (Simon) had been especially invited to the party for the community. I asked if she'd seen Simon at the party and she said no, but there were a lot of people there!
As we headed back I looked to my right and saw an old man carrying a korima pail headed in the direction of Simon's.  I said "stop, that's him!" Santiago wanted to argue but Samuel stopped and got out and asked the man on the path if he were Simon. Yes, indeed it was him!
That was Christmas day miracle #1.
Beto and Santiago walked with the old man back to his home. I rode the van to the top of the "killer" hill with Samuel and walked down to Simon's for the second time.
We entered his home and visited with Simon. As the old man is deaf it was hard to make him understand we were interested in watching him make a mask.  But we did get the idea over to him that we wanted to buy two or three.
I began to ask if he had the wood to make one.  Santiago being passive. The old man said he'd have to go down to the arroyo to get the wood-- madrono.  The arroyo was not far so we asked to go with him to watch him get the wood for the mask.
Simon got his ax and off we went past the second compound, down into a ravine and up an incline. Simon knew where a large madrono was and he chopped a slab or chunk out, about 10" to 16" and we started back.
Miracle of Christmas day #2: watching a mask being made from tree to finish. I photographed his tools around the slab of wood that would beome my mask while Simon and the other men drank coffee and visited. We made arrangements to go back the next day (today) about 9-9:30 am.

﻿ ﻿ When we got to Simon's today he was seated outside his wall on a log, hard at work. He had already shaped the mask and begun the process of digging out the backside. I took digital shots of the process and made a video with the little Sony digital camera.
Simon's outdoor workshop has a view out across the field to the mountains and ravines beyond. Gorgeous!
The goats came to visit and graze on the corn stalk stubs and old cobs.
We broke for lunch at 12:45. We'd brought the pinic of saltines and portales (sardines), orange soda, jalapeno condiments, some serious cheese, and cookies.

The mask needed only finish work as the old man resumed.  His arm began to ache and we said "let's stop for the day". Simon agreed.  We'll pick up two masks-- mine and Beto's on Friday around 2 p.m.
Before I left I took a black and white protrait of Simon-- he was tired.  I'll try to do another on Friday.
I climbed the hill again and pulled for air.  It's a serious climb for me. 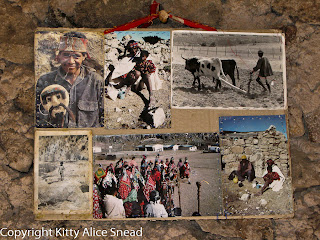 Aside: There were snapshots on Simon's wall, one of a young man holding a mask. That turned out to be his son, Felipe who now lives and works in Cuauhtemoc in agriculture.
I asked when Simon started making masks.  He said he couldn't remember-- a long time ago.  Clause had got him started.
He pulled out his ID card, Simon is officially 70 years old!
﻿ ﻿
Posted by Kitty A. Snead at 5:03 PM 0 comments